On Love and Programming with Joe Ksander and Kevin Adams

When living in a dangerous sci-fi world, allies are very important. But alliances can come in many different shapes and sizes.

This is the world of GEAR, a short film by Joe Ksander and Kevin Adams, about a young girl’s fight to survive in a dangerous world, which screens at the 2018 Science Fiction + Fantasy Short Film Festival this March.

Ksander and Adams are the perfect duo to explore the genre with resumes that sport some impressive workplaces. A Bay area native, Joe Ksander has worked at such companies as Rhythm & Hues Studios, Industrial Light & Magic, Nickelodeon Animation and Walt Disney Imagineering. Kevin Adams also has Walt Disney ties, having started his career in the Feature Animation department. He has also worked for DreamWorks Animation, Arc Productions, and Reel FX Animation Studios.

What attracts you to science fiction and fantasy as genres?

Science fiction and fantasy are great tools for exploring complex ideas in a simplified form. Which isn't to say that these are simple genres—they can be as deep as any other. But they give us an otherworldly vantage from which to tackle the most grounded and most human stories.

Why do you think sci-fi and fantasy continue to be such popular genres for storytellers?

Because sci-fi and fantasy wrap their ideas in the fantastic or supernatural, these genres give storytellers a freedom to explore new worlds from a unique perspective. And because everything must be created from scratch, even down to the rules of your universe, successful sci-fi and fantasy creators must exercise their imaginations more than in any other genre.

What inspired you to create GEAR?

A robot that gives unconditional love, even at its own expense, is a great lens to look at the costs that relationships demand of us. The robot Three cares about Mazzy more than she cares about herself, which makes protecting her a serious challenge. We also like asking the question—is it real love or just programming? And if you can't tell the difference, does it matter? 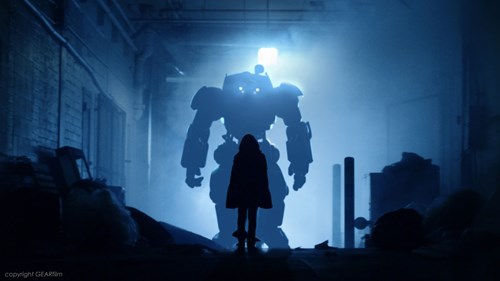 One of the things GEAR explores is the relationship between advanced robots and humans. Do you think humanity will ever live side-by-side with robots?

We already are living side-by-side with robots. The real question is how soon we will be living with true Artificial Intelligences.

AI has the capability to be the best thing we ever invent, but is also potentially the last. As we develop and design these new minds, we must be vigilant about keeping their goals aligned with ours. Not an easy task.

What's next for you as filmmakers and as artists?

We are currently writing and directing an animated sci-fi action-adventure feature (yes, with robots)! It's due out later this year. Look for an announcement soon!