Into the Vault: Tupac's Handwritten Essay "Give me Liberty or Give me Death"

Tupac Amaru Shakur handwritten essay, "Give me Liberty or Give me Death," 1992 (MoPOP Permanent Collection)

Did you know just a small percentage of our collection is actually on display inside the Museum of Pop Culture? With more than 120,000 objects in our care, it becomes a little easier to understand why there can't be a place to publicly display each one of our artifacts at the same time. But just because a piece isn't currently on view at our nonprofit museum, doesn't mean it's not important to popular culture. *cue ominous music*

To celebrate 20 years of MoPOP, we're taking visitors Into the Vault in 2020, highlighting artifacts from our broad collection and showcasing their place in popular culture. This month, in honor of Juneteenth, we take a closer look at a 1992 handwritten essay from Tupac Amaru Shakur titled Give me Liberty or Give me Death, part of the MoPOP Permanent Collection. The legendary hip hop artist would have been 49 this week (June 16).

Images of the essay and its full transcription are below. 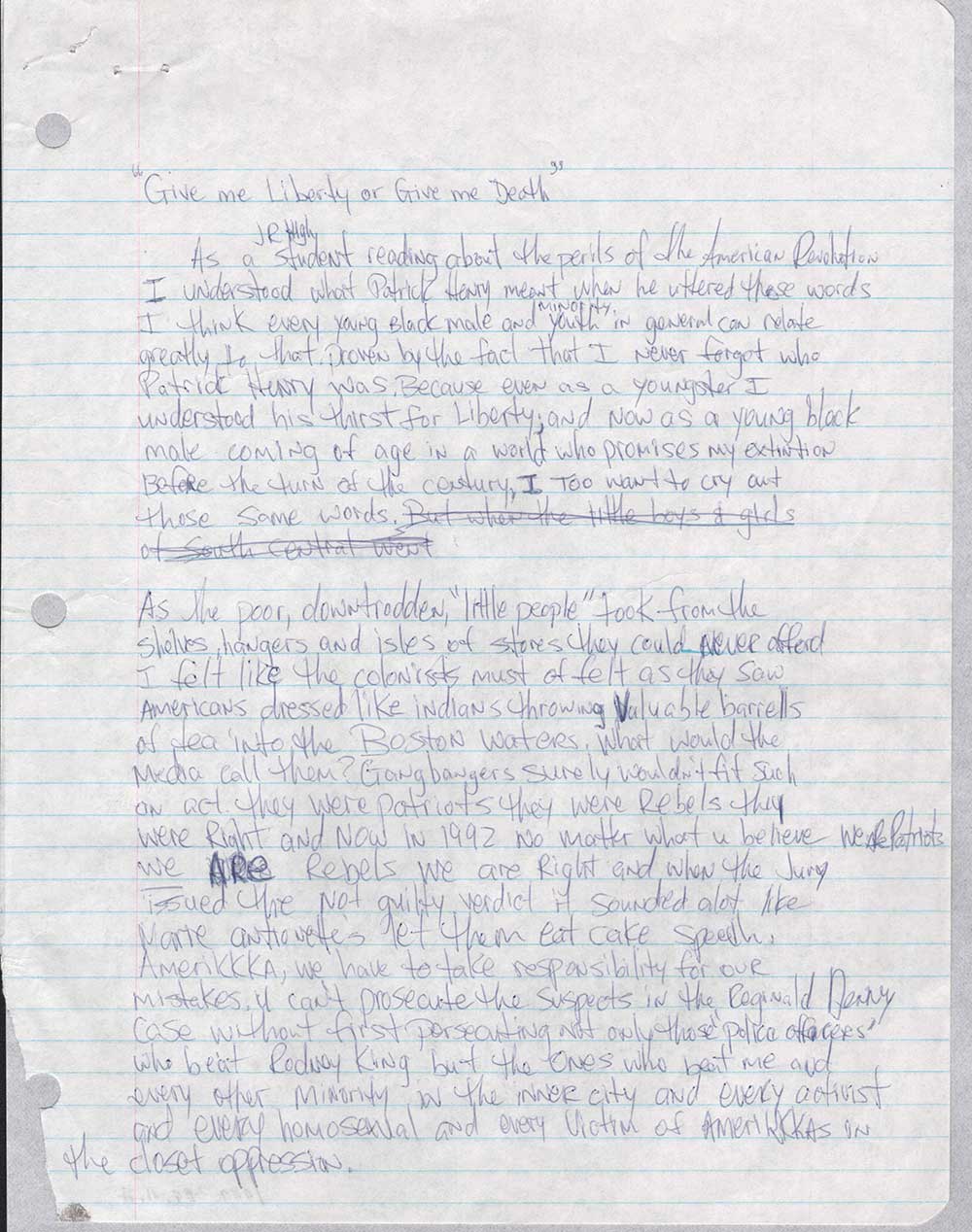 Tupac Amaru Shakur handwritten essay page 1, "Give Me Liberty or Give Me Death," 1992 (MoPOP Permanent Collection)

I understood what Patrick Henry meant when he uttered these words

greatly to that. Proven by the fact that I never forgot who

Patrick Henry was. Because even as a youngster I

understood his thirst for Liberty; and now as a young black

male coming of age in a world who promises my extinction

Before the turn of the century, I Too want to cry out

those same words, But where the little boys & girls

As the poor, downtrodden, "little people" took from the

shelves, hangers and isles of stores they could never afford

I felt like the colonists must of felt as they saw

of tea into the Boston waters. What would the

we ARE Rebels we are Right and when the Jury

issued the Not guilty verdict it sounded alot[sic] like

AmeriKKKA,[sic] we have to take responsibility for our

mistakes, U[sic] can’t prosecute the suspects in the Reginald Denny

case without first prosecuting Not only those “police officers”

who beat Rodney King but the ones who beat me and

every other minority in the inner city and every activist

and every homosexual and every Victim of AmeriKKKas[sic] on 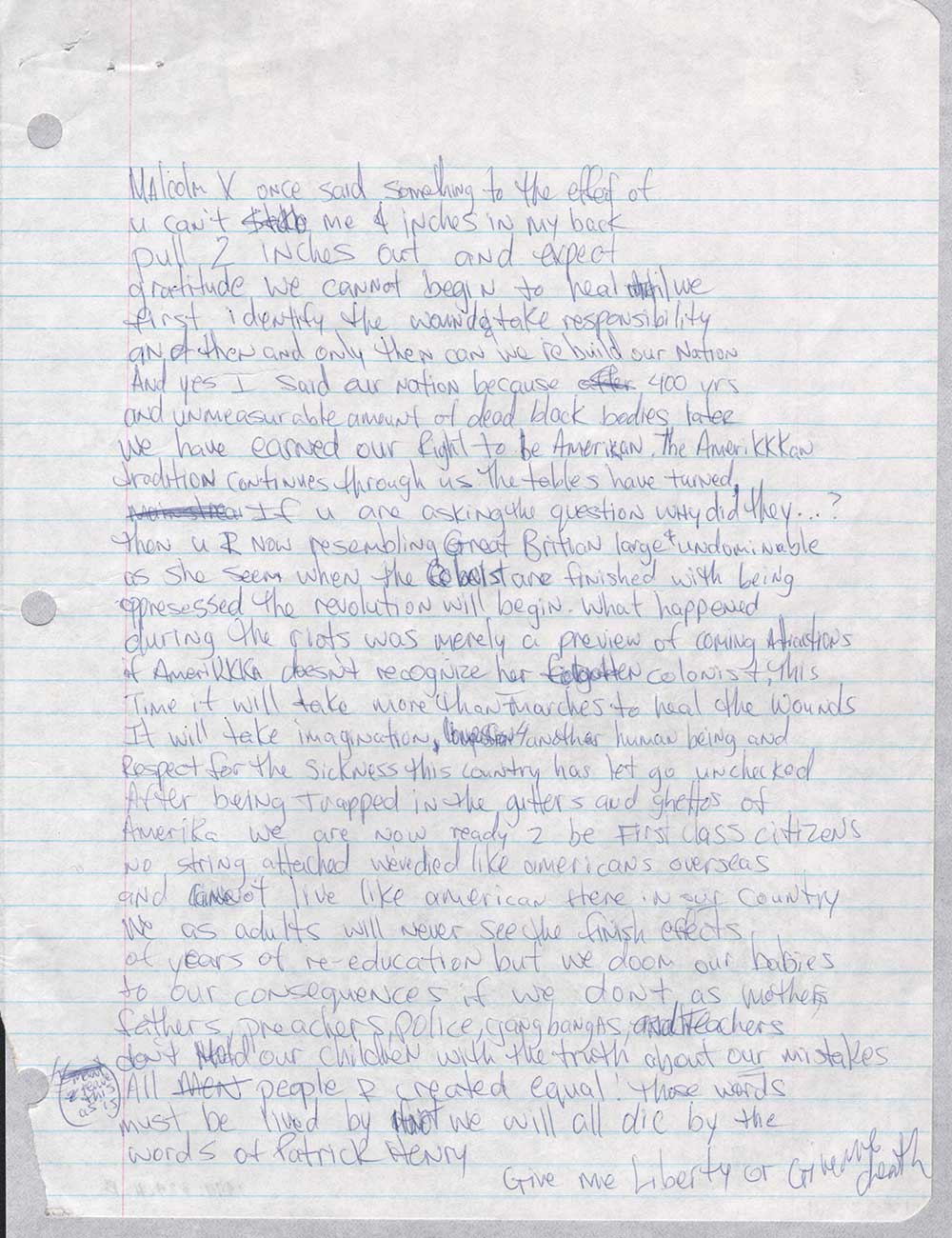 Tupac Amaru Shakur handwritten essay page 2, "Give Me Liberty or Give Me Death," 1992 (MoPOP Permanent Collection)

Malcom X once said something to the effect of

u can’t stab me 4 inches in my back

pull 2 inches out and expect

gratitude we cannot begin to heal until we

and then and only then can we rebuild our Nation

and yes I said our nation because after 400 yrs[sic]

we have earned our Right to be American. The AmericaKKKan[sic]

tradition continues through us The tables have turned,

mainstarea If u are asking the question why did they…?

as she seem when the Colonist are finished with being

oppressed the revolution will begin. What happened

during the riots was merely a preview of coming attractions

if AmeriKKKa[sic] doesn’t recognize her forgotten colonist. This

Time it will take more than marches to heal the wounds

It will take imagination, [ill] 4 another human being and

Respect for the sickness this country has let go unchecked

After being trapped in the gutters and the ghettos of

AmeriKa[sic] we are now ready 2 be First class citizens

and cannot live like american[sic] here n our country

We as adults we never see the finish effects

of years of re-education but we doom our babies

to our consequences if we don’t as mothers

don’t mold our children with the truth about our mistakes

[left margin says] (I meant to leave this as is)

must be lived by if not we all die by the

Give me Liberty or Give me death

To support our work, make a donation to MoPOP today!

Into the Vault 0 comments