The (Time) Chicken and the Egg with Nick Black

When was the last time you thought seriously about the classic chicken and the egg debate? Whatever the answer, it’s likely less time than Nick Black, as his SFFSFF short film explores this idea in a fresh and funny new piece of stop motion magic.

Raised in Wales, Nick is a self-taught, stop motion animator who draws influence from animators like Will Vimton and Rob Shaw. Time Chicken follows a plucky chicken looking to heal the rift in society by answering the age-old question: which came first the chicken or the egg?

Check out our interview with Nick and then make sure to check out the festival March 24 and 25.

What attracts you to science fiction and fantasy as genres?

They are extreme visions and so the films look cooler than any other genre when done well. I watch films to escape for two hours and perhaps do two-to-five minutes of analysis and thought afterwards, so when those two hours are spent off planet or in the company of trolls and goblins, you can be sure you've escaped.

Plus afterwards any realizations are even more poignant than usual, given that you may be sympathizing with a computer program or an elf. 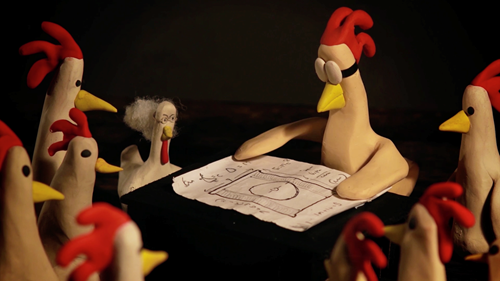 Why do you think sci-fi and fantasy continue to be such popular genres for storytellers?

It's a blank slate for your imagination—you learn about yourself by drilling into the furthest corner of your mind. If you are in a cynical or satirical kind of mindset, you will find yourself imagining dystopias and killer robots, whereas a more glass-half-full mood may yield a heroic tale of humanity's good side prevailing against evil. . . or whatever.

What inspired you to create Time Chicken? 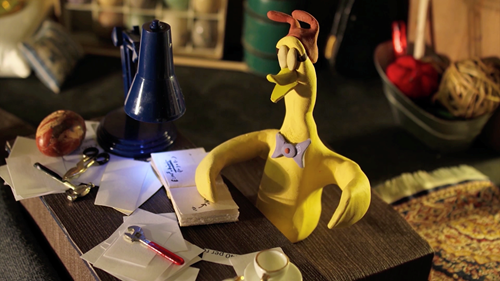 You frequently work in stop motion. What do you enjoy most about working in that medium?

I am of the opinion that if you trap someone down a hole and throw art materials and food down there something interesting will eventually come out.

With stop motion, it's just that—in a dark room by yourself, you get to make every single decision, every placed background object, every blink, every camera move. It's the best way to ensure singularity of vision. Plus, it's amazing fun. You get to be an actor without ever being in front of the camera. 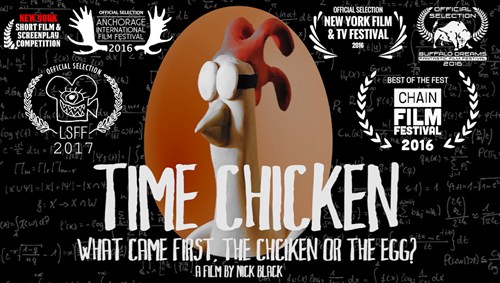 What’s next for you as a filmmaker and an artist?

I am taking a few weeks off work at the moment to make another short called The Discovery about two ancient scientists who have a fight in a laboratory and end up making more and more advanced weaponry. After that, my mission for 2018 is to join an animation studio that makes TV and film so that I can be properly involved in big projects. I stand at the foot of the mountain!