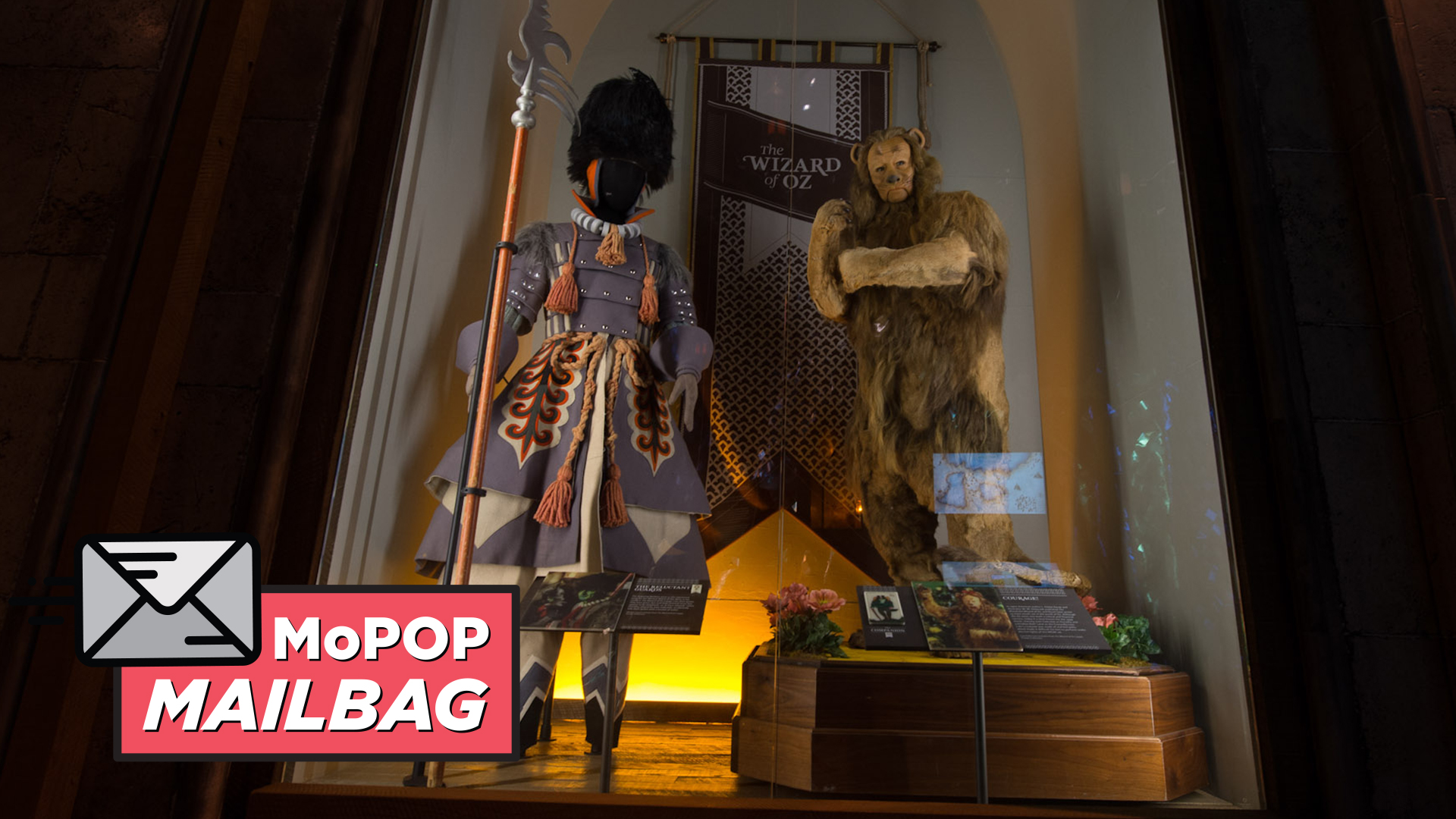 As part of our 2020 celebration honoring 20 years of the Museum of Pop Culture, we'll take time to touch base with members of our museum staff with the intent of asking them questions from you, MoPOP's visitors and fans.

On our blog throughout the celebratory year, the staff that curates the content inside our nonprofit museum, plans public and educational programming, runs events, marketing, partnerships, and more will be available to answer questions we receive from you either via the comment section of our blog, or on social media (find us on Facebook, Twitter, or Instagram).

Is there something you've always wanted to know about how MoPOP operates, or maybe you have a burning question about your favorite MoPOP artifact, event, or exhibition? Let us know and we'll put your question in front of MoPOP staff to answer in this space.

So, without further ado, let's get on to our second MoPOP Mailbag of 2020:

@Kbethery on Twitter asks: Can y’all tell me the history of your Wizard of Oz costumes? How did they come to MoPOP? What restoration efforts were made? How are these items maintained for display and the future?

Melinda Simms, MoPOP Collections Manager: All of the Wizard of Oz costumes are on loan to MoPOP from a generous private lender. The condition of the items as you see them now is the condition in which they arrived at MoPOP.

For all items, MoPOP takes great care in creating display methods that will not harm the objects or shorten their natural life span. We build custom mannequins out of archivally sound materials. We make every effort to assure that any stress on the garments or costumes is relieved by proper support—provided by the mannequin itself, extra padding, or invisible mounts. We also assure that the gallery environments in which the objects are displayed conforms to industry standards. Our galleries are kept at a steady 70 degrees +/- 2 degrees and a relative humidity of 50 percent +/- 5 percent.

When pieces come off view and are prepared for storage, almost all of them (the Cowardly Lion being the exception here—his pelts stay on the mannequin form) are removed from the mannequin and packed flat in large costume boxes made of acid-free cardboard. Sleeves and pant legs are stuffed with acid-free tissue and folds are padded to prevent irreversible creasing. Packed garment boxes are then stored in the dark in a climate controlled vault.

@Colin5CTLESS on Twitter asks: Years ago, in your Nirvana exhibit, you had a recording studio for fans to record their stories. What became of all those recordings?

Jacob McMurray, MoPOP Director of Curatorial, Collections & Exhibits: The “Nirvana Confessional,” as we called it internally, was an fun experiment. We got over 4000 recorded stories from fans of all ages. Those stories were then projected onto a screen in the room, interleaved in between live Nirvana performance footage. We were trying to convey the idea that the band and the fans were a symbiotic unit and one couldn’t really exist without the other. The Confessional space wasn’t moderated and was fairly private, so there’s a good amount of teenagers joking around, being jackasses, but there were also a lot of great, heartfelt stories. What was interesting to me was that the good stories really hit in two different age groups – fans that were in middle school and fans that were in their 30s. This was back in 2011, so interesting to me that there weren’t more substantive stories from folks that had seen Nirvana in concert early on, or had seen them live at all. But in any case, we still have those recordings, on our servers, all 4000+ of them. I’ve always been interested in using them somehow in a future project. And it’s interesting to think that these are a time capsule now, being nearly 10 years old. 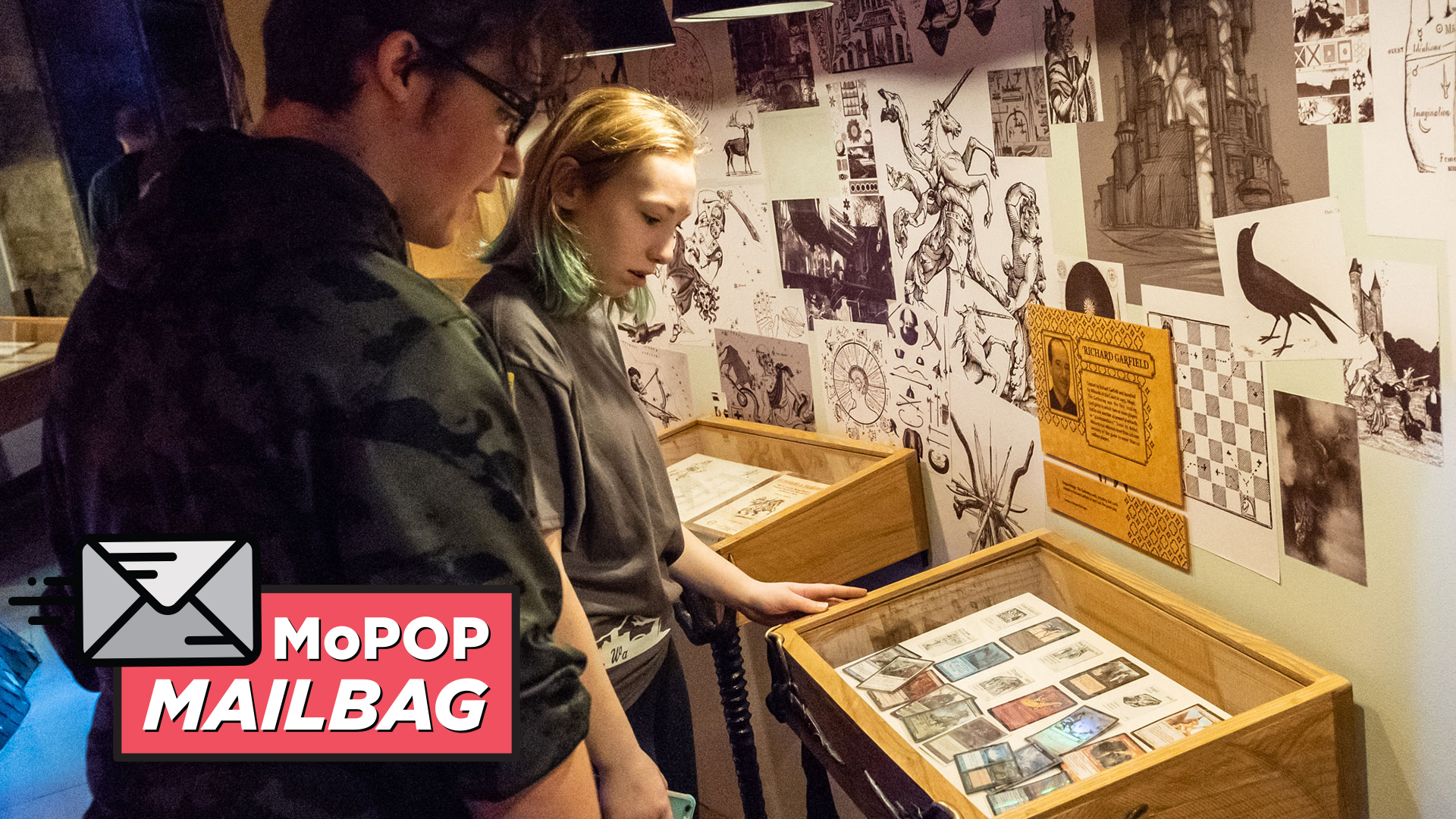 @VorthosMike on Twitter asks: Are there any plans to have a large scale Magic the Gathering art and/or history exhibition in the next 36 months?

Brooks Peck, MoPOP Senior Curator: I can't make any firm promises, but this is something we've discussed. With over 19,000 cards to date, the game has generated a LOT of terrific art (me, I'm an Anson Maddocks fan—Fallen Angel forever!). Magic: The Gathering has also strongly impacted gaming and popular culture, creating a new genre of game and an entire industry, plus it’s local, with the game’s Wizards of the Coast headquarters in Renton. I'd argue that we wouldn't have the current esports scene if not for Magic.

L.E. Hertel on Facebook asks: Has anybody ever found an unexpected bonus in a donated item, such as a unique pick lost in an acoustic guitar?

Jacob McMurray, MoPOP Director of Curatorial, Collections & Exhibits: The curators and collections team wracked their collective brains on this question, and while we didn’t come up with any unexpected bonus bits along with a donated item, there was one instance from an artifact that we had acquired for our permanent collection: Jimi Hendrix’s 100 watt Marshall Super Lead amplifier that he used at Woodstock in 1969. This amp had been extensively modified by West Coast Organ and Amplifier Service for stability on the road, giving it a tonal voice that worked well with Jimi’s pedals and guitars. In 2018, luthier Paul Reed Smith and some of his compatriots visited to take a look at the interior of the amp and identify what modifications had been made. During that inspection, we found a broken sewing needle that was trapped under one of the output transformer mounting legs. How it got there? Who knows.

Like what you see? Support our collections, exhibits, and more by making a donation to MoPOP today.