MoPOP Mailbag: Is 'Heroes and Villains: The Art of the Disney Costume' On Track For October? Is There Any New Info To Share?

As part of our 2020 celebration honoring 20 years of the Museum of Pop Culture, we'll take time to touch base with members of our museum staff with the intent of asking them questions from you, MoPOP's visitors and fans.

On our blog throughout the celebratory year, the staff that curates the content inside our nonprofit museum, plans public and educational programming, runs events, marketing, partnerships, and more will be available to answer questions we receive from you, either via the comment section of our blog or on social media (find us on Facebook, Twitter, or Instagram).

So, is there something you've always wanted to know about how MoPOP operates, or maybe you have a burning question about your favorite MoPOP artifact, event, or exhibition? Let us know and we'll put your question in front of MoPOP staff to answer in this space.

Without further ado, let's get on to our third MoPOP Mailbag of 2020:

Ryan Guevara on Facebook asks: I’m a huge Disney fan. Any word about Heroes and Villains: The Art of the Disney Costume exhibit scheduled for October? Should we still expect it for October? Is there any new preview info to share?

Brooks Peck, Senior Curator: Heroes & Villains is definitely on track to open this October. Honestly, I'm trying not to chew my own leg off in excitement for Heroes & Villains. And I want to tell you all about it. But I can't quite yet share everything. I can tell you that design is well underway, we're prototyping display platforms as I write this, and we're developing the scenic look and feel (umbrellas! snowflakes! rotating costume cases!). I can also share a few of the costumes that will be on display: all three witch costumes from 1993's Hocus Pocus, two Mary Poppins outfits including one from 1964, Brandy's ballgown from the 1997 Rodgers and Hammerstein’s Cinderella, and Giselle and Prince Edward’s costumes from 2007's Enchanted. And about 60 more. See you at the opening!

Kylah Trebbe on Facebook asks: How do you come up with new exhibit ideas?

Amalia Kozloff, Curator: What a great question, Kylah! It does sometimes seem very mysterious, even to us! Truthfully, we are inspired by everything and everybody around us. Literally, anything can spark a new exhibition idea—from the objects in our (vast) permanent collection to a meme (seriously!) to a conversation with a visitor or staff member (it probably also helps that we are all massive pop culture geeks!). Once we find those initial inspirations, we spend a lot of time down the proverbial (research) rabbit hole to see if the topics we've gotten excited about have enough substance and relevance to become full-fledged exhibitions that will engage and inspire our visitors. And from there, VOILA! an exhibition is made (just kidding, after that it is months and months of fun but hard work).

Jacob McMurray, Director of Curatorial, Collections & Exhibits: We do have a number of cool objects related to early rockers. Some highlights: Jerry Lee Lewis’ monogrammed tuxedo jacket, Elvis Presley’s motorcycle jacket, Carl Perkins’ Harmony Stratotone (his very first electric guitar) and Chuck Berry’s Gibson ES-355 electric guitar, among other cool pieces. And if we stray a bit outside of rock and rockabilly, we’ve got one of Patsy Cline’s dresses (that her mother handmade for her!), an iconic suit worn by Johnny Cash, and Hank Williams Sr.’s Gibson Southerner Jumbo acoustic guitar. Fun stuff! 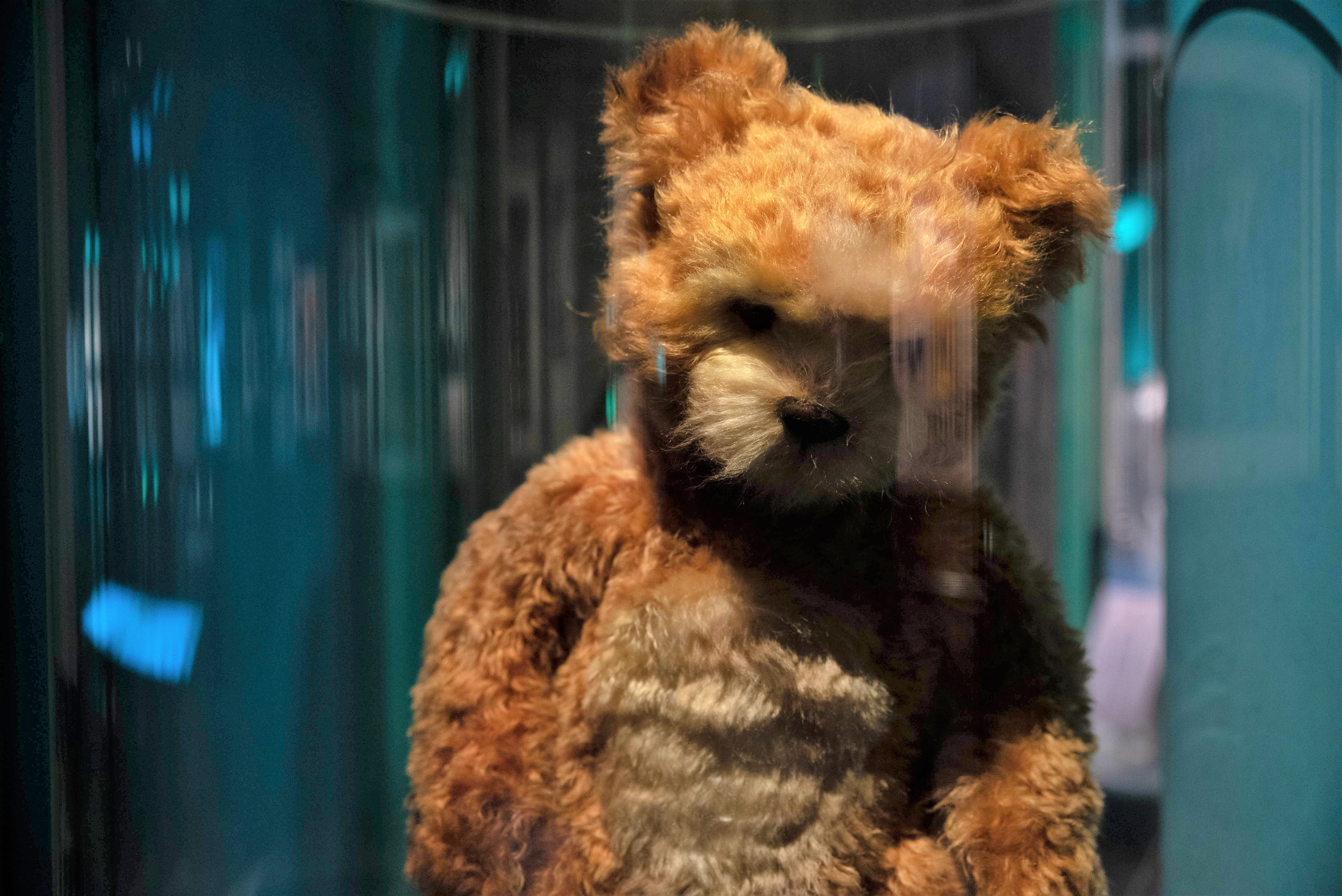 @alienmelie on Twitter asks: Does this Teddy (pictured above) live in the museum permanently?

Brooks Peck, Senior Curator: Teddy (from the 2001 film A.I. Artificial Intelligence) is on long-term loan to MoPOP, and we have no plans to take the object off display anytime soon. At this very moment there's a blanket thrown over Teddy's case since we're closed for a few months, and I imagine he'll be glad to see some light and visitors when we reopen.

@Dame_Jedi on Twitter asks: Is the Prince exhibit still around? Will it be there when you open back up?

Brooks Peck, Senior Curator: Prince from Minneapolis closed in early January of this year and returned to the Weisman Art Museum in Minneapolis. To the best of our knowledge, it won't be appearing anywhere else. That said, a few of the pieces from the show are available to see. When we reopen, it's likely we'll still be displaying one of Prince's cloud guitars (created by Bellingham luthier Andy Beech). And if you happen to be passing through Terminal 1 of the Minneapolis-St. Paul International Airport, you can see Rock Martinez's amazing 16-by-24 foot mural from the show, "I Would Die 4 U."

Dennis Zijtveld on Facebook asks: Can the exhibitions of Nirvana, Pearl Jam, and Jimi Hendrix still be admired also next year? I have postponed my travel plans to Seattle to next year.

Jacob McMurray, Director of Curatorial, Collections & Exhibits: Yes! All of those exhibitions will be on display at MoPOP in 2021, for sure.

Like what you see? Support our collections, exhibits, and more by making a donation to MoPOP today.