Van Helsing (2004) was conceived as an homage to the Universal Horror films of the 1930s and 1940s, films that showcased classic horror monsters and many of which make an appearance. We’re talking vampires, werewolves, Frankenstein’s monster, and even Mr. Hyde. It’s a tragedy (in my opinion) this film got terrible reviews, because it’s hilarious and delightful. They clearly wanted some kind of cinematic universe based on this movie (and a full four years before Marvel would launch theirs with Iron Man). They tease the mystery of Van Helsing’s forgotten past (and implied immortality), but the movie clearly wasn’t intended to give any payoff for those. Instead, we’re left awaiting further adventures from Van Helsing and his sidekick Friar Carl that we never got. So while we wait, here's five reasons why I love Van Helsing.

1. It Gets Frankenstein’s Monster Right

Van Helsing gives us something those classic horror films never did: a Frankenstein’s monster based on the actual book character. Gone is the grunting, shambling, not-very-bright monster Boris Karloff made famous. Instead, we get a character more true to author Mary Shelley’s original work: intelligent, philosophical, and monstrous in appearance. He’s been in hiding since the death of his creator, desperate to keep himself hidden from Count Dracula, who wants him for his own nefarious purposes. The Monster isn’t evil. In fact, Van Helsing specifically says that he can sense evil, and the Monster is not, and therefore he can’t kill him. It’s an underrated part in a mostly cheesy, campy film, but there’s real pathos in the Monster’s performance. He’s a deeply tragic figure that’s almost out of place in a movie that has a machine-gun crossbow and an exploding stagecoach.

2. Bond-Level Gadgets in the Victorian Era

Van Helsing is a character originally from Bram Stoker’s Dracula, an elderly doctor who studied the occult. Hugh Jackman's take on the character is an amnesiac monster hunter for the Vatican. The Vatican is basically MI-6 for 19th century Europe in this film. In a secret basement filled with religious scholars from around the world, they create such delights as the aforementioned machine-gun crossbow, various Batman-esque grappling hooks and whirling blades, and goofy sidekick Friar Carl’s sunlight bomb. Loaded with these goodies, no vampire should stand a chance against Van Helsing, except for the fact that he apparently has the aim of a Stormtrooper and takes 500 crossbow bolts to hit one vampire. I am pretty sure his appalling aim is just an excuse to show off the absolutely hilarious crossbow-gun by firing it more times than could be possible in any universe.

Even better than the ridiculously anachronistic gadgets in the film are the costumes. Kate Beckinsale stars as Anna Valerious, who spends most of the film resplendent in an epic corset and thigh-high boots. Her hair makes my own curls weep with envy! And while Jackman’s stuck mostly being Grumpy Trenchcoat Guy costume-wise, the vampires get some spectacular outfits. Specifically, Dracula’s brides Marishka, Verona, and Aleera are in outfits ripped straight from the cover of 1950s pulp novels. Bedecked in flowing draperies and ridiculously pointy collars, they prance and purr and pose, putting the “vamp” in Vampire. It’s a good thing they’re already (un)dead, because I don’t think a crop top and sheer bloomers are really weather-appropriate for the mountains of Transylvania.

In Dracula’s “summer palace” (really a church in Prague), Van Helsing and Carl must rescue Anna. She’s been kidnapped by one of the brides in an attempt to ransom her for the Monster. Carl and Van Helsing stash the Monster in a cemetery and head off to the ball, figuring Dracula can’t cause a scene in public.

Meanwhile, Anna is under Dracula’s hypnotic spell and dances with him in a glorious red ballgown. On the packed dance floor, surrounded by waltzing couples, acrobats, jugglers, fire-breathers, and contortionists, Dracula tries to seduce Anna into becoming his newest bride. She rejects him, but not before Dracula asks if they make a lovely couple, leading to this fantastic shot: 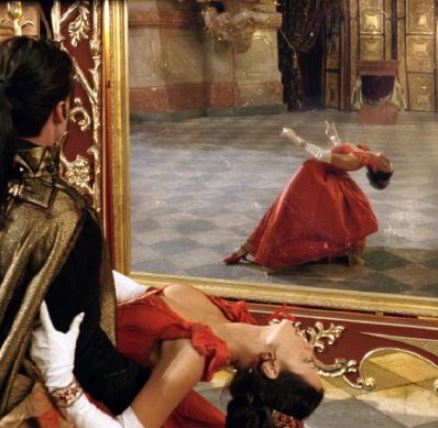 That’s right. Everyone is a vampire here except Anna. It’s not until Igor drags the Monster in and Dracula points him out in the balcony that Van Helsing realizes, as the partygoers unhinge their jaws and sprout fangs as they come for him. Good thing Carl finally knows what one of his gadgets is for!

Roxburgh is perhaps better known as the smarmy Duke from Baz Lurhmann’s Moulin Rouge(!), but he’s played two other iconic characters in addition to Count Dracula: Sherlock Holmes (The Hound of the Baskervilles, 2002) and his nemesis, Professor Moriarty (League of Extraordinary Gentlemen, 2003.) This puts him in a very exclusive club: the only other actor to have played the three roles of Dracula, Moriarty, and Holmes is Orson Welles, who played each in a different radio program.

Dracula’s goal in the movie is to use Dr. Frankenstein’s monster to give life to his literally thousands of embryonic offspring. Yes, in this movie, Dracula bangs. Or as Van Helsing succinctly puts it: “A man, with three gorgeous women, for four hundred years?”

But Dracula and Van Helsing have some history of their own. Van Helsing has amnesia, but Dracula doesn’t; he addresses him as “Gabriel” and hints that he knows all about Van Helsing’s past. Turns out, Gabriel Van Helsing was the man who murdered Dracula the first time around.

Roxburgh’s performance is the height of melodrama. He’s fully embraced the camp of the movie and the role, and it shows in every scene. He goes from sinister hissing to despondent wailing to bellowing to polite conversation all in the space of a dozen lines. He doesn’t so much chew the scenery as utterly devour it. Roxburgh actually won an award (or lost, depending on how you look at it) for “worst fake male accent.” I say that accent was a deliberate choice, and you cannot convince me otherwise. The final battle between Dracula and a werewolf-ified Van Helsing was clearly meant to showcase the giant CGI vampire, but that’s almost boring after Roxburgh’s tour de force.

Van Helsing was the first entry into what should have been a new era of camp monster films. And while it spawned a Syfy series, we didn’t get the further adventures of Jackman’s Van Helsing. Maybe all that will change with the upcoming reboot that’s in development!

Jenny Newell is a volunteer at MoPOP.