The Answer to Climate Change… is Dungeons & Dragons

Jayden Byrne, director of An Adventurer’s Guide to the End of the World, wants us to change the way we talk about climate change — but not in the way you think.

Set in a faraway realm of magic, the short film follows a group of friends who gather to play a tabletop role-playing game based on an imaginary world called “Earth.”

Yup. Just let that sink in.

The conflict that follows sheds a humorous light on our inability to deal with the cataclysmic issue in a productive way. But the ultimate goal, Byrne says, is to reframe the ominous conversation in a way that feels less heavy and more manageable, making it easier to keep the topic top of mind.

We caught up with Byrne before the film’s debut at this year’s Science Fiction + Fantasy Short Film Festival (SFFSFF).

Where did this amazingly meta idea come from?

“Myself and the other writer [Jackson Blair-West] were coming to the end of a three-year Dungeons and Dragons campaign. And around the same time, climate change was dominating our conversation, and really taking our focus.

“Whenever we discussed it, the focus was always on how horrible and terrifying it is — and of course, it is. But it left us heavy with the weight of the problem, and it didn’t feel like something you wanted to take home and keep talking about after a few hours.

“So we wanted to find another way to engage with the issue. We wanted a way to engage with it continuously that didn’t burn you out — a way that was accessible and funny without dwelling on the negative or trying to shock you into action.” 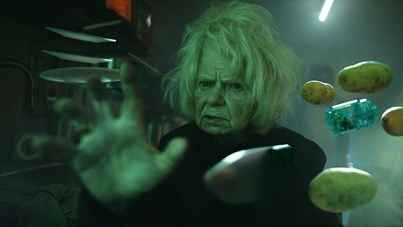 What point were you trying to communicate? (Aside from 'climate change = bad,' of course.)

“I think the main point is that you can engage with these complex problems that are catastrophic and global without tying yourself into knots. That’s not to say that the way we are currently engaging is wrong, it’s just important to engage however we can.

“If you’re scaring people, if you’re telling them that the world is crumbling around them, more often than not, people just disengage from that. Because it’s too much to understand, it’s too much to bear… and it’s too easy and tempting to distract ourselves from harsh reality. So if we are constantly sounding the alarm in same way, we risk pushing people away.

“[But] if you’re delivering [the issue] to them in this way that’s palatable, that’s interesting, that’s funny, that doesn’t make them feel horrible — or doesn’t make them feel like they’re going to bring it up around the table and ruin dinner — I think that’s how we can really land these messages and bring it into conversations in a different way.”

Why’d you choose fantasy to help you accomplish that goal?

“The beauty of the sci-fi and fantasy genre specifically is that there is an additional degree of separation. It’s not our world, not our reality. So it allows the audience to grapple with the conflict of the characters without uncomfortably confronting the parallels in their own lives.

“From the first scene we know we aren’t in our reality through the beautiful costume and production design by Ella Deane. That distance makes it easier to engage with complex issues that we aren’t really equipped to deal with as individuals.”

So what’s the big takeaway for the characters?

“Basically, the message is that collaboration and cooperation is the only way to affect meaningful change.

“There’s a moment where [that happens]. It’s quite a small moment, but what I think it comes down to is… letting go of personal interest and working as a whole… and remembering why they’re playing the game in the first place.”

An Adventurer’s Guide to the End of the World will premiere alongside 18 other sci-fi and fantasy shorts during the 17th annual Science Fiction + Fantasy Short Film Festival on Saturday, May 21 and Sunday, May 22, as well as online. Tickets are now available. See the full lineup.