Ready for more stupendous slashers? Today, Public Engagement Producer, and fellow horror lover, Sarah Beard is taking us on a journey through the wild world of horror at the end of the 20th century.

The Plot: The sleepy little town of Woodsboro, California turns into a bloodbath when a teenage girl and her boyfriend are gutted outside her parent’s home. There's a killer on the loose who has seen a few too many scary movies and anybody could be next. He stalks his victims, taunts them, then slaughters them. This ghost-faced killer could be anyone. 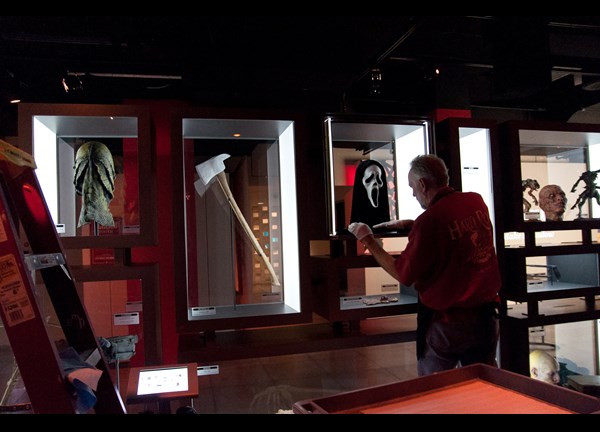 Installation of the Ghoastface mask in Can't Look Away circa 2013

Why it’s Top 5: After its hey-day in the 70s and 80s, the slasher genre started to lose its edge and was becoming a bit stale and campy. Then, almost out of nowhere, Wes Craven came back to revitalize the genre with a few meta-horror films that brought the spine-tingling fear and thrilling suspense back to this nearly lifeless sub-genre. Scream was fun, clever, and fresh and it was just what the genre needed.

Notable True Crime Connection: Screenwriter Kevin Williamson, has said that he created Ghostface after watching a TV special about the Gainesville Ripper, Danny Rolling. Rolling terrorized the college town of Gainesville, Florida in the summer of 1990 when he brutally murdered five students, attempted to murder his own father, and committed a triple homicide in Louisiana. Now someone just needs to make a movie specifically about Danny Rolling, I’d watch it.

The Plot: It’s two years later and Sydney and Randy are students at Windsor College, trying to get over their tragic experiences in Woodsboro. Cotton Weary, the innocent man who was fingered as Ghostface, is out of prison and cashing in on his erroneous imprisonment. Gail Weather’s best-selling book, The Woodsboro Murders, is getting turned into a film called Stab, but right before the movie is set to debut, the murders begin again! Cue the song, “Who Can it be Now?” by Men at Work. (That should’ve been in on the soundtrack, yo!) 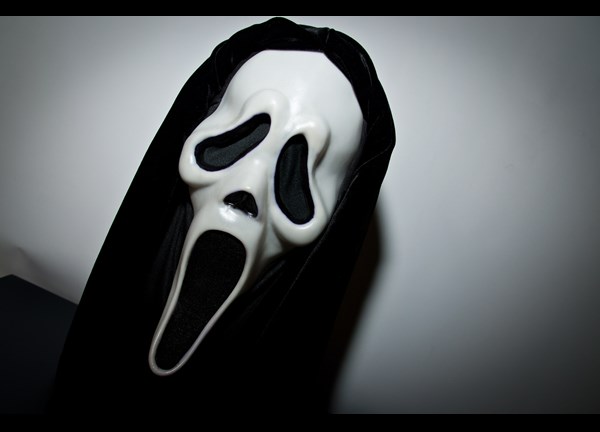 Ghostface mask worn in Scream on display at MoPOP in 2013

Why It’s Top 5: Rarely does a sequel live up to it’s predecessor but Scream 2 managed to pull it off and do something that other sequels couldn’t, it stayed relevant and it kept audiences guessing at every turn.

One of the “Rules for a Sequel” is that it should be an even bloodier film, so I think the gore factor could have been cranked up a bit, but the film is just as smart, satirical, and suspenseful as the first. With some mysterious new killers donning the mask, you never know who might be behind the Ghostface.

Best Kill Scene: The movie Stab has just been released and Phil Stevens (Omar Epps) has dragged his date Maureen (Jada Pinkett Smith) along to see the film.

Phil gets up and heads to the restroom and once inside sees that both urinals are being used by Stab fans wearing Ghostface masks. He decides to step into a stall, but before he can do his business he hears a strange noise coming from the stall next to his. He gets closer to the dividing wall and places his ear up against it, hoping to hear more clearly what’s coming from next door. Suddenly, the real Ghostface stabs him through the wall with a giant blade and blood pours from his mouth. With that first kill of the film, Ghostface sets the scene for more murder and more gore than ever before. 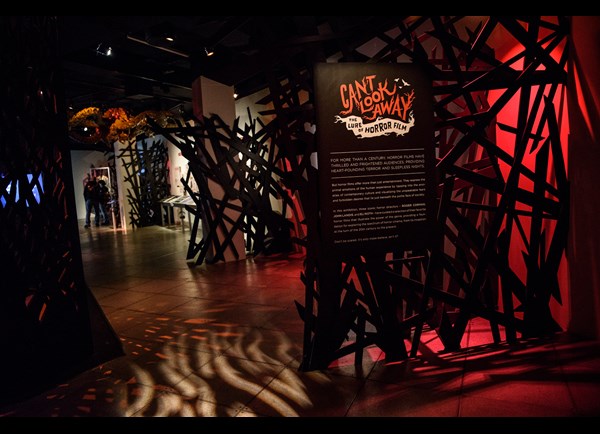 Our first horror exhibition, Can't Look Away: The Lure of Horror Film circa 2012

I Know What You Did Last Summer

The Plot: Four friends hit a pedestrian with their car and instead of calling the police like sane people, Barry (Ryan Philippe, of course!) convinces them they will go to prison for manslaughter. So they dump the body in the ocean and pretend like it never happened.

From there, Barry gets run over by a man with a meat hook, then Max (Jonny Galecki) gets skewered through the chin with said meat hook, killing him. The mysterious meat hook man then begins straight up stalking J. Love, Sarah Michelle Gellar, and Freddie Prinze Jr. That’s what you get for hiding a murder, I suppose. 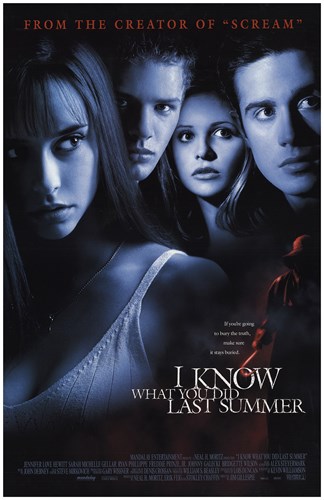 Why It’s Top 5: Some people (OK, a lot of people) have said I Know What You Did Last Summer was just a rip off of Scream. The detractors say it didn’t come close to the gore and suspense of Wes Craven’s meta-horror film, which came out less than a year before. But I totally disagree with that notion.

I’ll be the first to admit that I might be slightly biased because, at the time IKWYDLS debuted, I was a sophomore in high school (with questionable taste). I remember seeing it in the theater and loving it. In my opinion the film was so incredibly different than Scream that the two shouldn’t even be compared. IKWYDLS is not a meta commentary like the Scream series and Wes Craven’s New Nightmare were, instead this film had a classic slasher feel, evoking the same kind of suspense found in films like Halloween and Friday the 13th.

Notable Mention: The trailer for this film is one of my favorites. Even though parts may feel a little cheesy, the 90s just ooze from this trailer like LA Looks hair gel onto your freshly crimped ‘do, and that’s just what this 80s kid loves.

The Plot: A graduate student, who is researching superstitions, learns of an urban legend called the Candyman, who many believe to be responsible for a recent murder on the north side of Chicago.

The legend claims that Candyman can be summoned by saying his name five times while looking into a mirror. Anyone who tries to conjure him will be slaughtered by his bloody hook. Are you brave enough to try? Candyman, Candyman, Candyman…… 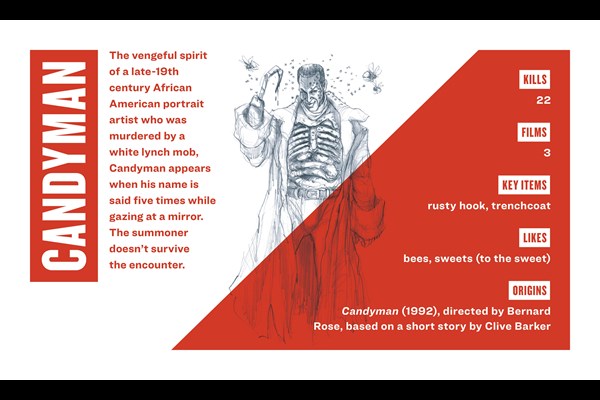 Slasher stats on the Candyman, currently on display in Scared to Death: The Thrill of Horror Film

Why it’s Top 5: Candyman sets itself apart from other films in the slasher genre in quite a few ways, most notably of which was by not shying away from social not often tackled in horror film.

From the perfect casting of Tony Todd as the tall, dark, romantic villain, to shooting at the Cabrini-Green housing project in Chicago, director Bernard Rose took Clive Barker’s shot story ‘The Forbidden’ to another level with his radical, powerful examination of race, class, love, prejudice, and fear.

Notable True Crime Connection: Though the Chicago-based legend of Candyman is a work of fiction, there was an actual serial killer known as “The Candy Man.” Dean Corll earned his sweet nickname because his family owned a candy factory, and between 1970 and 1973, he kidnapped and murdered at least 28 young boys in the Houston area.

Additional Points for Best Score: Phillip Glass created a beautifully creepy and mournful score filled with organs, glockenspiels, and ethereal vocals. It’s classic Glass and leaves me wanting to hear more of his musical genius in this film genre.

The Plot: In what may be the most meta movie of all time, Wes Craven’s New Nightmare blurs the lines between fantasy and reality with director Wes Craven and his cast playing themselves as well as playing characters in a new movie within a movie. Confused yet? Freddy Krueger is back and he’s killing people in the real world! Heather Langencamp is forced to reprise her role as Nancy to save her son and stop Freddy for good. 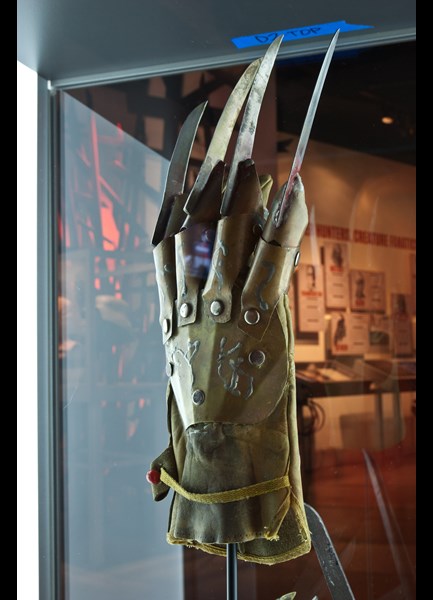 One of Freddy's gloves previously on display

Why It’s Top 5: In my opinion, the Nightmare franchise fell off after Dream Warriors. Freddy just lost his scare-factor after the third film; the films became too campy and silly to take seriously as good horror—until New Nightmare that is! Wes Craven came back in full force with a film that was well written and scary, with callbacks to the original that make you love the first movie all the more. This was, without a doubt, one of the best slasher films of the 90s.

Best Scene: When Freddy licks Nancy through the phone it’s just as gross, terrifying, and terrific as in the original.

Sarah Beard is a longtime MoPOP employee, whose desert island picks would be the Silence of the Lambs, the My Favorite Murder podcast, and the song, "I Put a Spell on You" by Screamin' Jay Hawkins.