i///u: The Flavor is Everything

It’s Sound Off! season at MoPOP, and we’re thrilled to introduce you to the artists who will be rocking the stage all month long. If you want to hear the future of Pacific Northwest music, join us at the Semifinals each Saturday in February, starting February 9.

i///u blends traditional soul with a dash of pop inspiration to create a neo soul sound that is all their own. Smooth brass flows over up-tempo rhythms, making their tracks delightfully danceable, while dynamic instrumental arrangements give a spicy edge to their stew of jazz, R&B, and soul. Take a sip, but be careful, these tunes are hot.

Aside from their incredible music, my favorite thing about i///u is their love of a particular vegetable, which you’ll learn about in the clip below. Rarely have I seen such passion for vegetation in a band. It was lovely to behold.

You can check out i///u live at Semifinals #1 on February 9 at MoPOP.

Katyrose: To me it means everything because we’re all [from] the Pacific Northwest region, and the spirit of this competition and this entire event has just been incredible from day one.

[Sound Off!] is in the spirit of promoting and supporting others, and the larger musical community, and youth, and intersectionality, and the whole of pop culture. The entire intention and spirit of this competition is wonderful, and we get to do what we love with everybody. 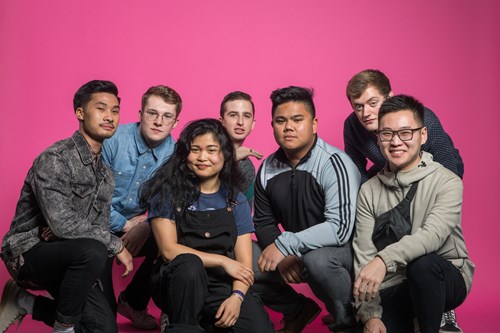 Scott: Yeah, I don’t know. It’s like kind of bringing in Erykah Badu a little bit but also, trying to speed it up.

Katyrose: Jazz influence for sure, but that’s neo-soul.

Katyrose: I think we’re consciously trying to be like, “We are not in this pocket,” because that can be restrictive, and we don’t want that. 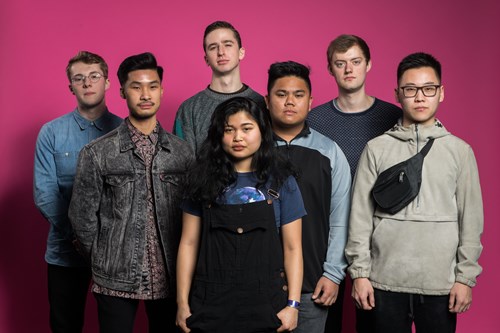 Scott: That’s the big one.

Katyrose: Yeah, couldn’t live without it. For sure, and like honesty since we actually have an avenue to just talk about our group, I just love these people. They’re incredible musicians.

Katyrose: I feel so blessed.

Katyrose: Except for you. [Laughs]

Katyrose: But playing music is truly a universal language of human kind and is essential, in my opinion, to anthropological and societal growth and movement and it is just so important, but also [it’s important] to my soul.

What I like about being in this band is that we’re a bigger band for one, so it’s like a team. We also consciously — we call it “i///u stew” — we also consciously like try to bring in other friends and honestly anyone. Scott is a master networker and he brings in photographers, videographers, just everybody from campus [and] from off-campus.

Billy: It takes a village.

Katyrose: It takes a village. 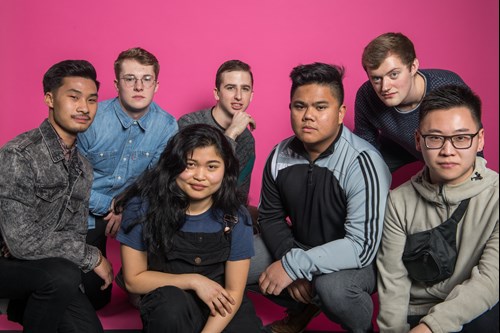 Scott: I think what we hope to achieve is [to] spread that [feeling of] community and ultimately get the youth interested in listening to music. I think one thing that we strive[d] to do in our first year [was to] play everywhere, and I mean everywhere. At house shows, we played terrible gigs where [we said] “Oh my gosh, we’re never doing that again.”

Scott: And it’s that whole thing where wherever we go is a mob.

Scott: [Laughs] Yes, it’s my mob. It’s everyone’s mob. But it’s also about spreading that community and smiles, you know?

Katyrose: And I think we do it for the love of the craft but also [because] it brings people together, not only on the production side of the music but on the listening side. It’s this amazing interaction. 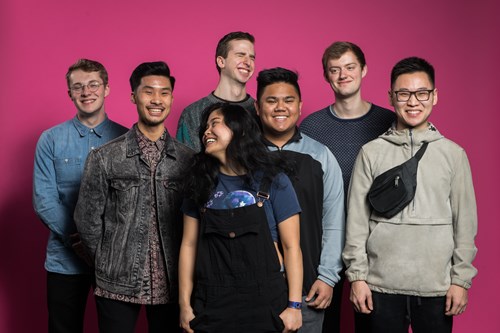 Katyrose: I’ve been waiting my whole life for this question because I have a favorite vegetable and it’s an onion. I love onions. I have a tattoo of an onion actually.

Katyrose: It’s just spicy. I don’t know, I’m just throwing it out there.

Katyrose: It’s a spicy onion. Can we use that?

Jason: There’s many layers to an onion.

Scott: It’s like, “Oof, baby I want some more but you’re like [shrugs shoulders] oof. It’s a lot on my heart”, you know?

Katyrose: It’s the flavor. They’re a little underrated, understated because you never — this is my whole spiel — because you never see it on the main menu like, “This is the main entrée. This is a pearl onion.” You don’t see it, but it’s there. It gives you the flavor, the flavor is everything. That’s what we strive to be.

Check out i///u at Sound Off! Semifinals #1 on Saturday, February 9. Get your tickets right here.