To celebrate 20 years of MoPOP, we're taking visitors Into the Vault in 2020, highlighting artifacts from our broad collection and showcasing their place in popular culture. This month, we take a closer look at a handful of tools used by graffiti and mural artist Lady Pink.

Who Is Lady Pink?

Lady Pink is an established graffiti and mural artist born in Ecuador and raised in New York City, where in 1979 as a teenager in high school she was introduced to an art form that used underground subway trains as a canvas.

"The excitement and thrills of vandalizing those, and that was my opening into the world of art," she says.

Lady Pink's significant contributions to graffiti, one of the four major expressive art forms of hip-hop culture, earned praise among her male counterparts and, according to Lady Pink's bio, she became well known as the only female capable of competing with boys in the graffiti subculture.

"I came to this country from Ecuador when I was a small child. I guess I would be to have been called a Dreamer," she says. "I grew up in New York City. So, I am fully American. I assimilated into the culture, and as an immigrant, I feel that I was perhaps welcome—being a minority—into the graffiti world, which was predominantly male, but it was also predominantly minority. African-American and Latinos was about 80 percent of the graffiti artists in New York City, and about 20 percent were white, definitely. So I fit right in. I was Latina, I was bold. They welcomed me in."

Lady Pink's career above ground took off in the '80s, when her and other graffiti artists were invited to showcase their work at exhibits and events. A trailblazer in the rise of graffiti- and mural-based art, Lady Pink has had her work on display at places like the Brooklyn Museum, the MET in New York City, the Museum of Modern Art, Tate Modern in London, and more.

"The message I hope to leave as a legacy is that you don't underestimate any female," she says. "I was a little, tiny, Latin, 90-pound weakling, or so they thought. But the heart that I displayed and the courage that I have for this kind of work was just unstoppable. So with determination, hard work, perseverance, I want people to realize you too can become a success. You can become an artist and live life to the fullest." 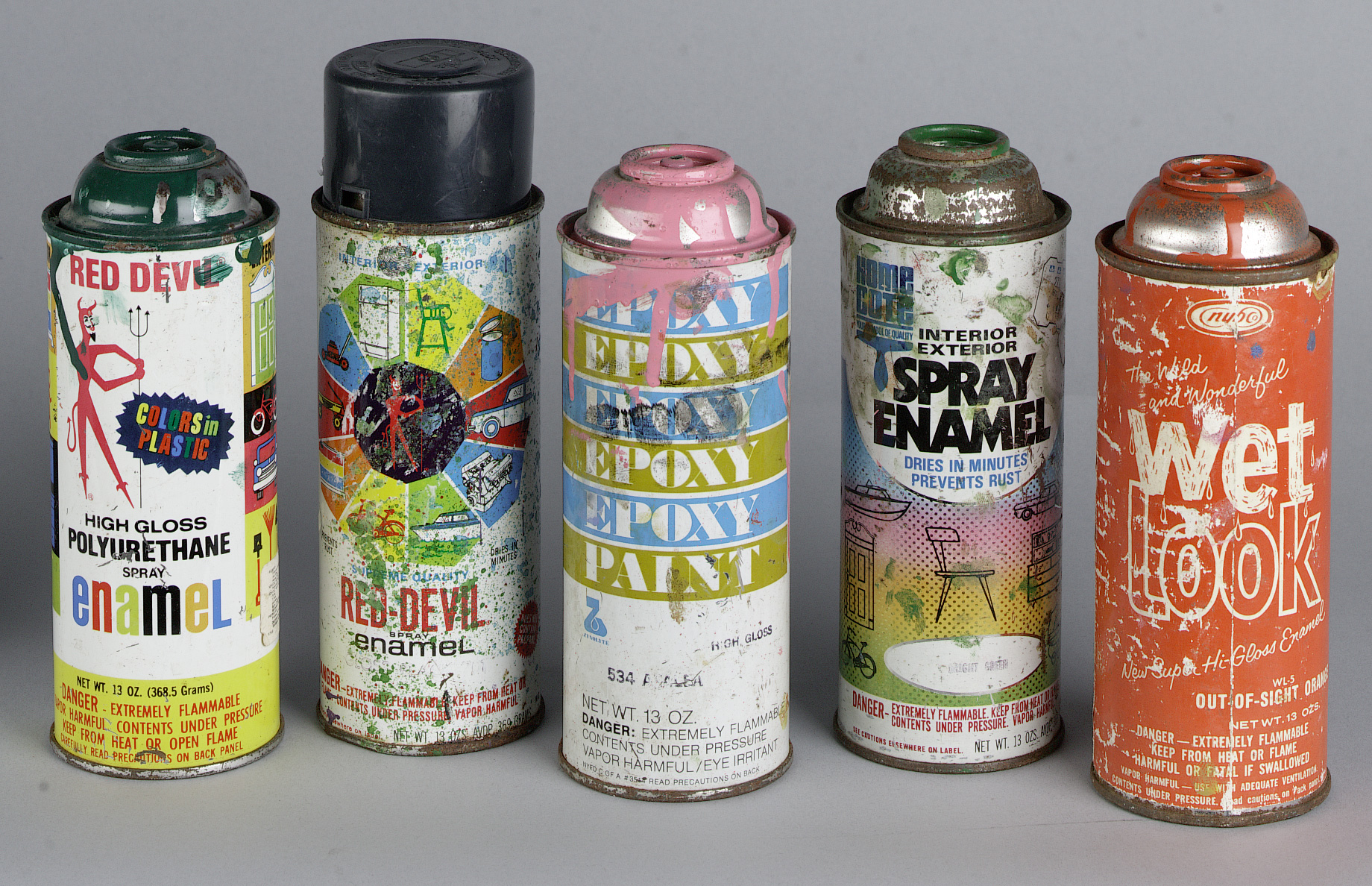 Traditionally, graffiti artists obtained their paints by stealing them, a process referred to as "racking up" and an act that was necessary to be known as a real writer. According to Lady Pink, "If you admitted buying your paint, you were a real sucker; same thing for paying your fare for the subway."

Graffiti artists are highly knowledgeable about spray paint, and Lady Pink is no exception. The image above features an assortment of spray paint cans used by Lady Pink, including an Epoxy Azalea (middle), "the most beautiful pink to be put out," says Lady Pink. She describes Epoxy paint as super strong, thick, and quality paint that was favored by writers for its durability versus the "buff," what the Metro Transit Authority instituted in 1978 to eliminate graffiti from its subway cars by passing them through an operation akin to a car wash, which sprayed cars with gallons of chemical solvent. 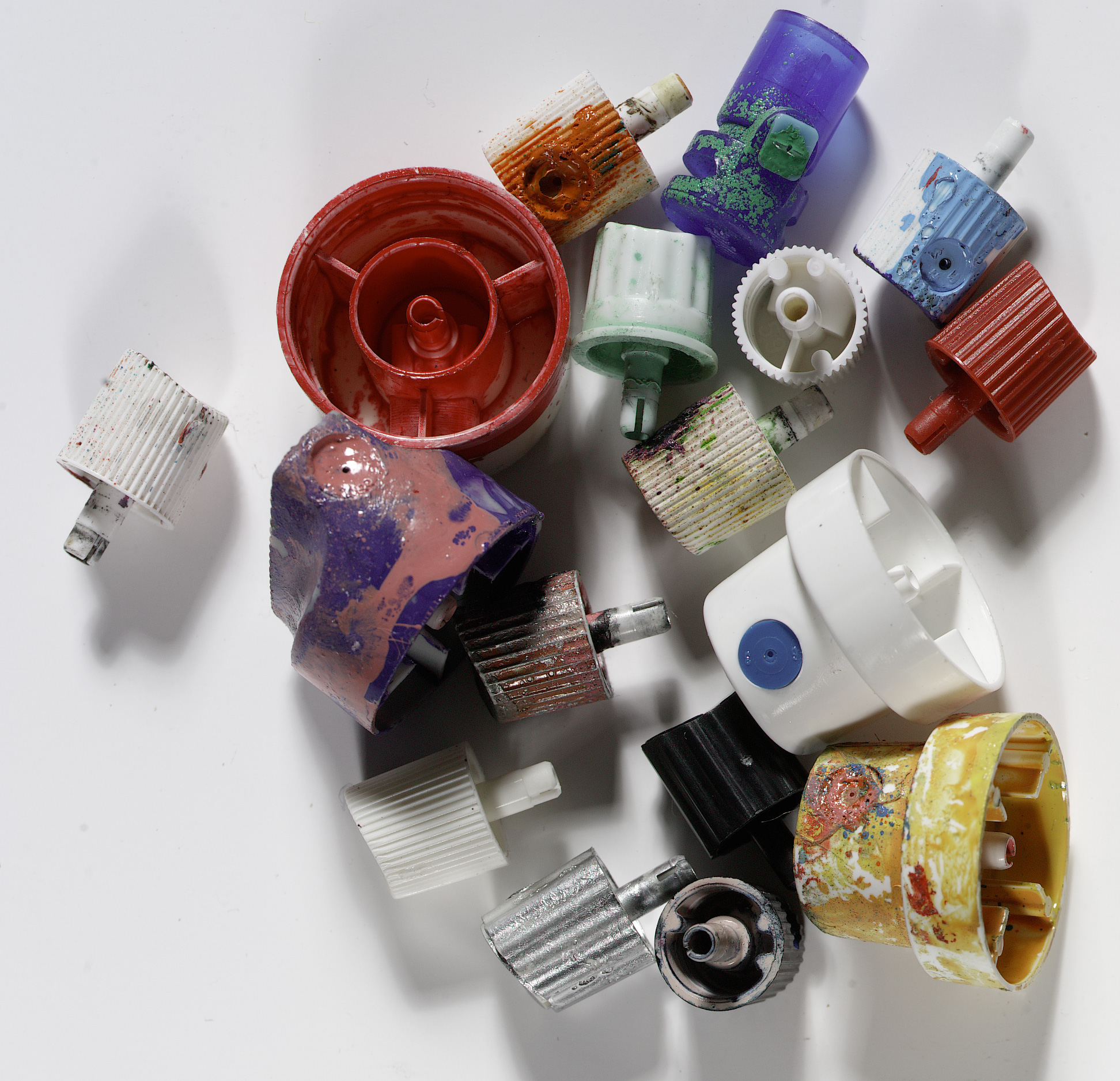 While the original nozzles of spray paint cans can get the job done in many instances, nozzles from common household or industrial products can also be used to produce a variety of effects.

An assortment of spray paint caps used by Lady Pink can be seen in the image above, with "fat" caps better suited for broad sprays and "skinny" caps useful for more linear work.

Lady Pink tells MoPOP: "You can tell fat caps from skinny usually by two things. The hole in the front is bigger than normal in a fat cap and the slot on the stem is bigger on fat caps. You have to learn all these things by picking up caps from oven cleaners, starch sprays [and] Lysol cans. Car parts supply stores [also] had many different aerosol cans."

Much like how writers relied on "racking up" to collect their paints, graffiti artists would steal caps from stores, with Lady Pink noting an artist could snag anywhere from 50 to 100 caps without a store knowing.

"Most companies that had this problem with their product changed the caps to female caps, which are unusable in spray paint," Lady Pink explains. "In the 1990s kids here (mostly Midwest kids) and some German kids bought them wholesale from the plastic manufacturers, typically [at] $8-10 per thousand, which is a lot easier than stealing them....[But now] manufacturers both here and in Europe are on to this scheme and have stopped selling large quantities of caps."