The Faculty (1998) is a teen slasher with some Invasion of the Body Snatchers, some Breakfast Club, and some Buffy the Vampire Slayer all rolled into one. It’s written by Kevin Williams, known for Scream (1-4) and The Vampire Diaries. It’s directed by Robert Rodriguez, known for Machete, Spy Kids, and Sin City. It is packed with stars, including Elijah Wood, Jordana Brewster, Josh Hartnett, Usher(!!!), Clea Duvall, Salma Hayek, Famke Janssen, Jon Stewart, Piper Laurie, Robert Patrick, AND MORE!

I love The Faculty because I love late 90’s early 2000’s teen movies, and this one combines so many fantastic and unexpected elements. I think on the surface, it’s dumb, it’s funny, and it’s really enjoyable. But I think if you dig a little bit deeper, it can not only be a metaphor for fear of conformity or fear of growing up, but maybe even anti-fascist. To help illustrate some of these ideas, I’ve compiled my top 10 favorite quotes from the film.

SPOILER ALERT: Something you need to know about the film before you read these quotes is aliens take over the school by slowly inhabiting the bodies of the faculty and then the students. A small rag-tag group of teens remains, and they do everything they can to find the “queen” alien. If they can kill her, all the other aliens will die as well. Here’s one of the taglines for the film: “The students at Herrington High always suspected their teachers were from another planet... they were right!” Amazing.

Here are my top 10 favorite quotes from the The Faculty:

Nurse Rosa Harper (Salma Hayek) is in the faculty break room, sniffling and sounding all kinds of sick. She is approached by Professor Edward Furlong (Jon Stewart).

Nurse Harper: No thank you, I'm using my sick days for when I feel better.

Mr. Furlong: Maybe I should just put a pen in my eye.

So corny, but delivered with complete seriousness. I think this line encapsulates the vibe of the movie, and both its cringey-ness and its hilarity. This line also foreshadows Mr. Furlong’s fate where, in fact, he does get a pen stabbed right into his eye. 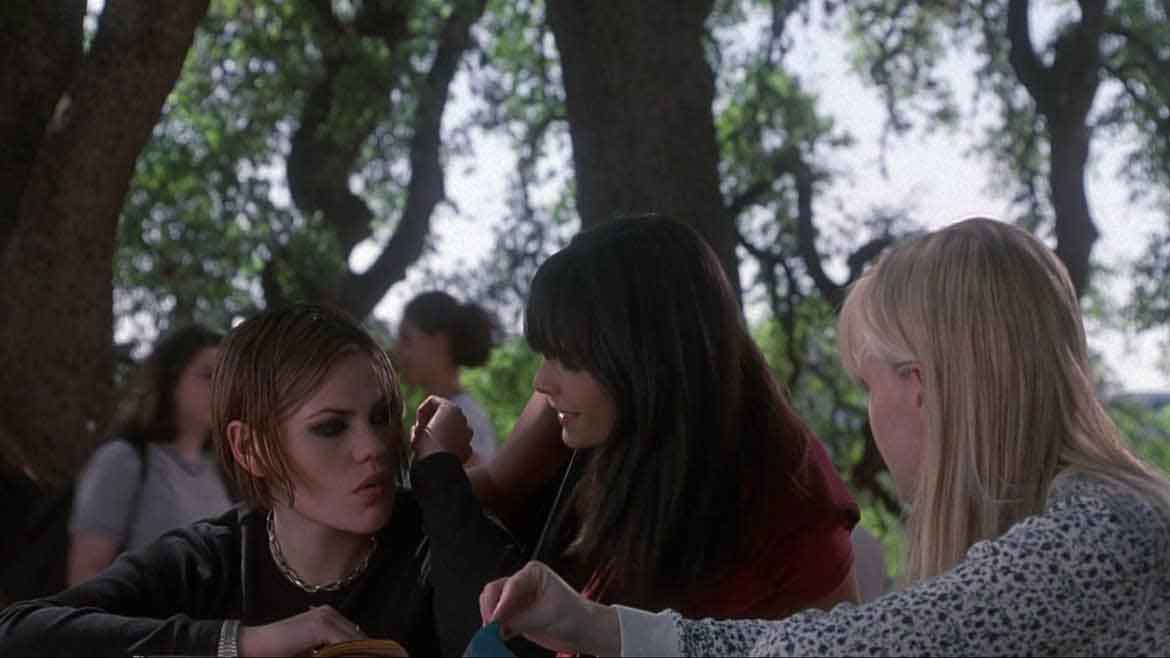 2. "I'm not aware of any lesbianism in my lineage."

Delilah (Jordana Brewster) has come across the new girl, Marybeth Louise Hutchinson (Laura Harris) chatting with loner Stokely (Clea Duvall.) She seems to have a real ire for Stokely, and warns Marybeth:

Delilah: I hope you're not a violent lesbian like your newfound friend here.

Marybeth: Uh no, I'm not aware of any lesbianism in my lineage.

LESBIANISM IN MY LINEAGE!?!?! Sounds like something an ALIEN would say…

3. "You're right about me. I DON'T have any friends and I like it that way. Being a lesbian is just my security."

Marybeth seems somewhat obsessed with the fact that Stokely is (allegedly) a lesbian. She later pairs up with Stokely for science class and wants to talk to her about it more.

Stokely: I'm not a lesbian, alright?

Marybeth: BE ONE, please, fly free.

Stokely: You're right about me. I DON'T have any friends and I like it that way. Being a lesbian is just my security.

Marybeth: Your security against what?

This is where I think one of those more serious metaphors starts to take shape. Stokely is pretending to be a lesbian, so that people will leave her alone? What kind of people? People like Marybeth. This can be interpreted in a bunch of different ways, but I think its notable that Marybeth is tall, blonde, thin, and white. Stokely could mean that she doesn’t want to hang out with popular girls who will ultimately turn on her. Or she could mean that she doesn’t want to conform to whiteness, to privilege. More on this to come. 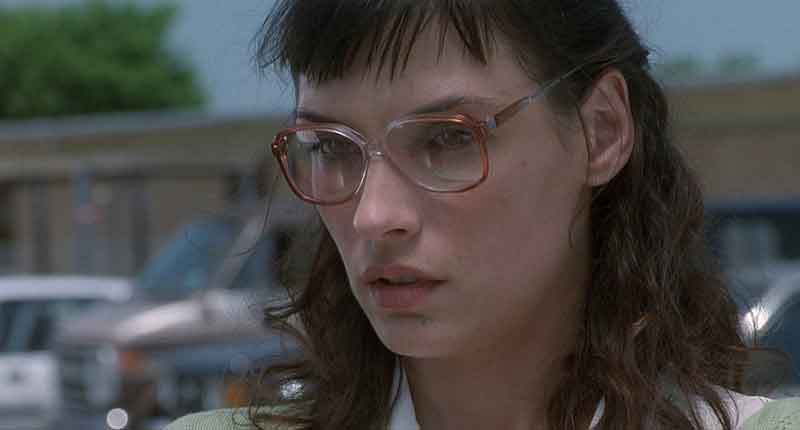 Zeke Tyler (Josh Hartnett) is repeating his senior year of high school. He sells drugs to other students, and one teacher seems to wish she would change his ways. Miss Burke (Famke Janssen) approaches Zeke, who is selling drugs out of his trunk in the school parking lot. They go back and forth, with Miss Burke urging Zeke to “apply himself” to his studies, not sell drugs on school property. She is demure, nervous, but ultimately seems to genuinely care about Zeke and his future. Zeke says she needs to loosen up and offers her drugs, which of course she refuses.

Zeke: How about these. Condoms. Magnum-sized. And they're cherry flavored. Oh c'mon Ms. Burke, they're on me.

This may seem really straightforward on paper, but the way Janssen delivers this line is what makes me love it so much. She is crushed. She says this line in a way that really conveys how hurt she is by what Zeke said, and then turns and walks away.

Gabe: Hey yo, pisswad, you're in my way.

6. "Pretty cool human being when you're not being a first-class grade-A bitch."

Casey (Elijah Wood) and Delilah (Jordana Brewster) are partnering together for the newspaper. They’ve clearly known each other for a while, and Casey might have a crush on Delilah. They sneak into the faculty break room to snoop and dig for “stories” for the newspaper. Delilah talks shit about the teachers, and makes light of their real-life suffering.

Casey: Pretty cool human being when you're not being a first-class grade-A bitch.

Delilah: Are you hitting on me Casey?

Casey: No. No, I just think that you can be cool. Sometimes. This not being one of them.

This is another line that feels so “I’m an adult writing lines for teens, is this how they talk?” and I love it. 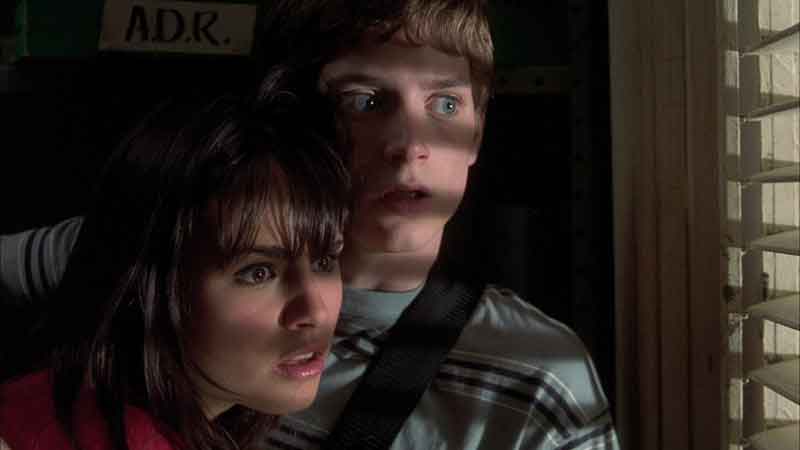 After snooping, Casey (Elijah Wood) and Delilah (Jordana Brewster) have to hide in the faculty break room closet when the alien teachers come in and then take over another teacher right before their eyes. Casey and Delilah eventually run out of the closet, try to find help, and realize all of the other teachers have been infested as well. They involve Casey’s parents and the police, who, of course, don’t believe or help them. The next day at school, Casey and Delilah hide in a bathroom stall to talk about what they’re going to do next. Instead of appearing with her hair in its usual style, Delilah shows up with her hair in a bun and glasses on, a classic teen girl disguise.

Delilah: This is all your fault. Do you think I'm in drag for the aesthetics? They're after me.

It is amazing to me that Delilah thinks wearing glasses and putting her hair up is DRAG. What??!?

The small group of teens has gathered in a classroom, and Casey (Elijah Wood) is trying to convince the rest of the group that the teachers are being taken over by aliens. Mr. Furlong (Jon Stewart) walks in on them, and then attacks them. They engage in a bloody and violent fight, ultimately stabbing him in the eye with a pen and killing him. The bell rings.

Stokely: This is usually the point where someone says let's get the fuck out of here.

Stan: Let's get the fuck out of here!

This sequence has some real gritty Scooby-Doo vibes, and I am HERE for it!

The group runs away to Zeke’s drug lab, where they’re trying to figure out how to kill the aliens. They begin to accuse each other of being aliens, citing strange behaviors. Stan (Shawn Hatosy), a former high school football star quarterback, has decided to quit the team, and Delilah (Jordana Brewster) finds that highly suspicious.

This is my favorite line of the film. What an amazing summation of the teenage experience.

The teens are now actively seeking out the queen alien, so they can kill her. Stan (Shawn Hatosy) has now been overtaken by an alien. The remaining team has split up, leaving Stokely (Clea Duvall) and Marybeth (Laura Harris) alone in the gym.

Marybeth: What happens at the end of all those stories, Stokely? How does 'Invasion of the Body Snatchers' turn out?

Stokely: They get us. They win. We lose.

Stokely: That's because that wasn't Stan, they took away who he was.

Marybeth: Maybe they just bettered who he was. Cleared away his confusion. I know you pride yourself on being the outsider, but aren't you tired of pretending to be something you're not? I know I am.

AND THEN MARYBETH TURNS INTO A HUGE ALIEN! This part kind of continues that metaphor of conformity and fascism. The aliens are basically saying that if you conform, if you become one of them, all your problems will go away, and you’ll be blissfully happy. In a later monologue, Marybeth says “I can make you a part of something so special, so perfect, so fearless...” They want assimilation, but it seems more sinister than just that… 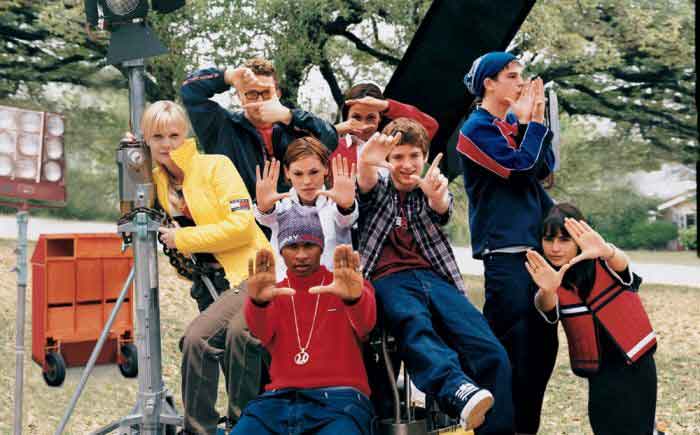 Thus concludes our journey through quotes from The Faculty, a movie that I think is So Bad It’s Good. But before we go, I’d like to leave you with one last anecdote: in the film, you’ll see the Tommy Hilfiger logo on several items of clothing that the teens wear. I remember Tommy being huge at the time, and definitely a cool kid status symbol. I also remembered that the group of teens from the movie appeared in TV commercials and print ads for Tommy Jeans, and I was able to find one of those commercials. It is so embarrassing.

Give The Faculty a watch (or rewatch), and let us know what you think!