Have you ever watched a TV show or film that featured a character with the same job as you? Have you ever thought, 'But, that's not how it is at all!' Us, too! So, as part of a limited content series titled MoPOP Movie Reviews, we'll take a look back at some of our favorite films and analyze how museums, art work, and art workers are portrayed.

A note before we begin: the tragic loss of the Black Panther himself, Chadwick Boseman, still hits us hard, and we want to take a moment to reflect on his tremendous talent, legacy, and life. This film would have never resonated with so many without his incomparable performance as the titular hero.

This month we’re reviewing Black Panther, and we’re super excited about it. Given, this is a short scene related to museum/art work, but it’s got SO MUCH content. Amalia Kozloff (MoPOP Curator) and Chris Moore (MoPOP Exhibits Projects Coordinator) were joined by Kwapi Vengesayi (MoPOP Public Engagement Producer) to review this scene on a microscopic level, and we all had an awesome time discussing how much Black Panther just straight up got it right.

For real, we love Black Panther. We loved it when it came to theaters, we loved it when we had MARVEL: Universe of Superheroes in our galleries, and we love it now when so much of it feels so pertinent. Here’s a blog post that Kwapi wrote about the importance of Black Panther, here's an oral history with James Miles where he recaps his love of Black Panther, and if you happen to be curious about the possibility of a real-life Wakanda, check out Mutapa in this NPR article.

OK, now let's dive in. The same rules as previous MoPOP Movie Reviews apply: Black Panther starts with 20 points and gains or loses points throughout the review depending on our staff's assessed levels of realism in the museum/art work fields. This should be an interesting one! 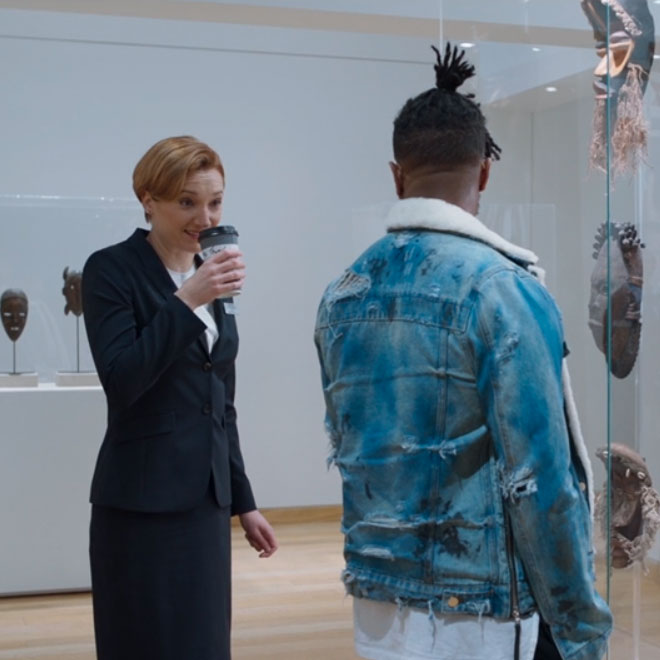 All right, this one’s easy. You all know what we are going to say: No drinks allowed in galleries. No drinks for curators in galleries. Just no drinks ever in galleries. Ever.* Stop It. That curator knows better and it drives us insane. For real, when we said we were reviewing this movie, all of our colleagues immediately went to, “Oh yeah, the curator with the coffee...”

Oh! Also? There’s talk in reviews that maybe she’s a director. You know what? NO DIRECTOR COFFEE IN GALLERIES EITHER. 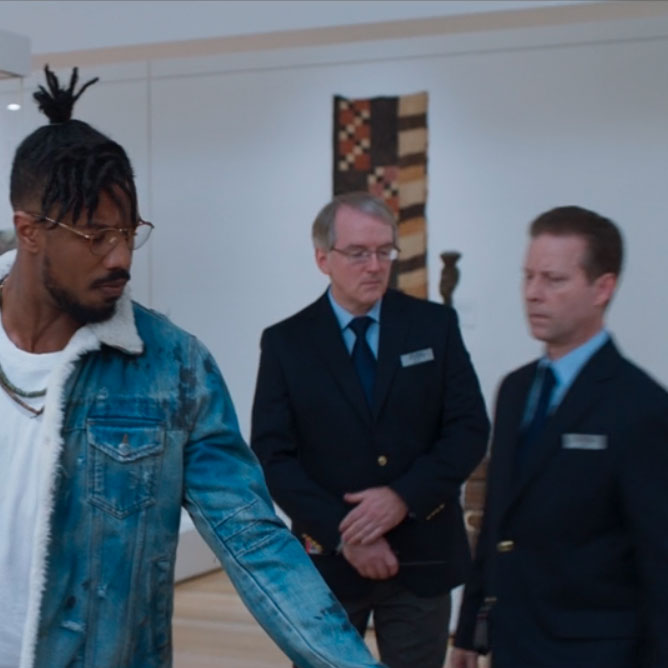 We counted four security guards in that gallery at once. How many spare guards does this museum employ at a time? And, are they all hanging out in this one gallery 24/7, or is it just because there’s a Black person in the gallery? Because we’re guessing they don’t usually have that many guards in one location at a time. It speaks to the reality of BIPOC experiences in public spaces. And, if someone wants to make the argument that there are this many guards because of the curator in gallery... as much as we’d like to treat our curators like prized jewels, they won’t allow us. Because that’s really weird. 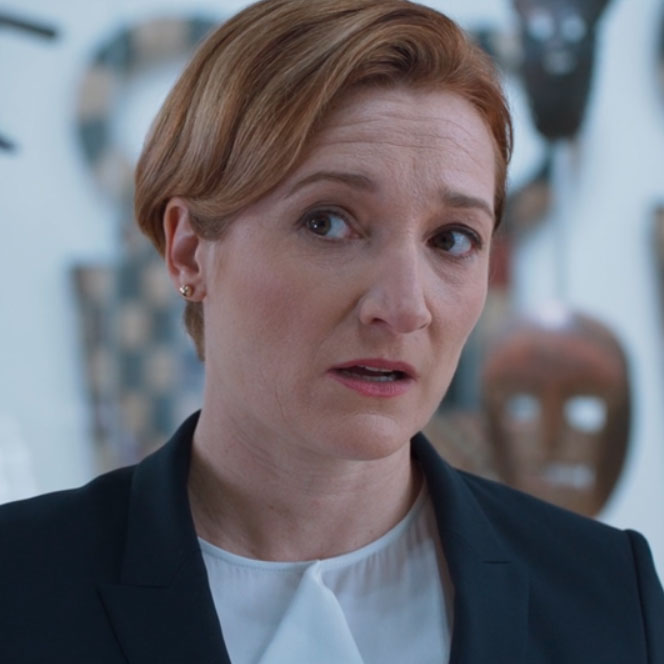 How many times have we received an email from a guest who’s an expert on a topic? So many, folks. Like, SO MANY. Basically, every time we open a new exhibition, we wait for the emails. We budget in extra money for graphics because there will be something we want to re-print. Sometimes the content is wrong because new information comes to light. Sometimes it’s wrong because we’ve got literally THOUSANDS of words in a gallery and a typo slips by us. And sometimes it’s wrong because of computer goblins (it’s a real thing!). Whatever it is, we’d rather know and fix it than have wrong information up that non-experts will take as truth. 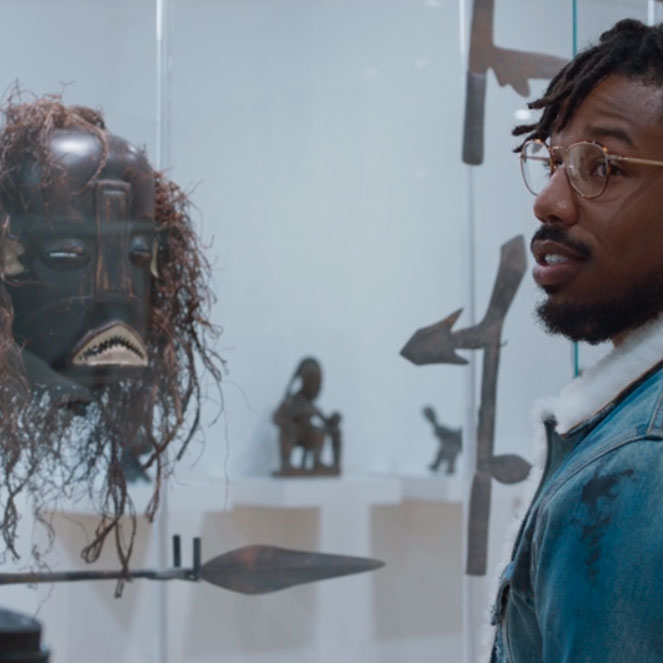 As mentioned in our review of Raiders of the Lost Ark, a fair amount of stuff in museums was collected unethically, and even stolen. This is problematic in a lot of ways. We’re not going to get into that here because you can read about it in our earlier blog. Instead, we’re going to talk about our acquisition process because we’re quite proud of it, tbh. Amalia’s been working on documentation of this process, but we’ll translate. We hope to do a deeper dive on our acquisition process in the future because YAY TRANSPARENCY, but this is just going to be a quick info dump:

Basically, MoPOP has always collected their objects through fair, ethical, and equitable methods. When we have purchased objects, we pay creators either fair or above market values for their creations and many of our donations are from the creators themselves. If we buy an artifact from a third-party vendor (like an auction house or whatever) then we make sure that it hasn’t been stolen or acquired in other problematic ways.

So, this gets points because stealing artifacts is real and loses points because it's such a bad practice that we’re happy to see is getting talked about. Because just stop it. 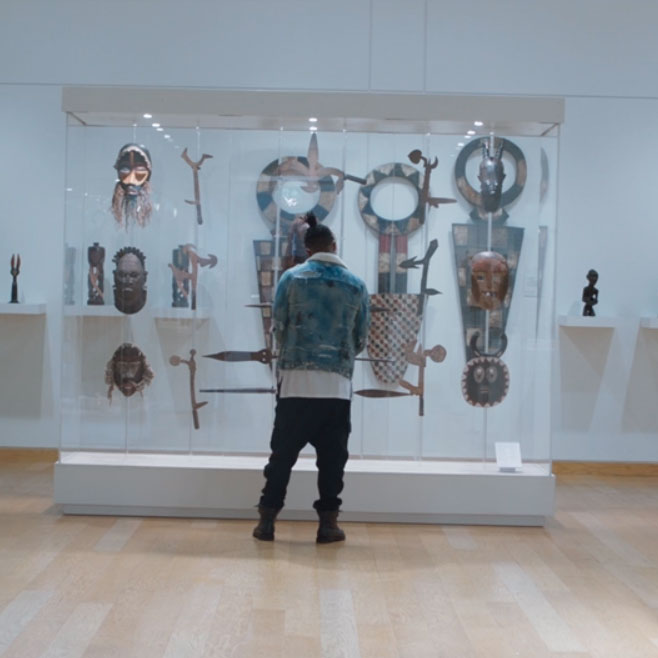 Why Are Museums So Sterile?

If you’re anywhere near MoPOP, you can tell that we’re a slightly very different style of museum than the stereotype of the modern, white-walled, sterile museum. This isn’t a call out post to any of our fellow museums, just an observation... BUT WHAT’S WITH THE WHITE WALLS? Yeah, you don’t need to take it to the crazy level that we do. And yes, shameless self-plugs because our exhibits are awesome. 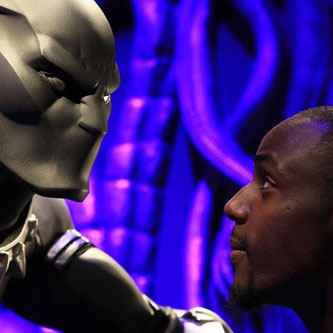 They really hit the major notes in museum life and even delved into some of the more nuanced parts of it. As Kwapi said, “You could teach a college course on this scene alone,” and he’s absolutely right.